AVON, N.C. — It looks a lot like my wife will be buying a Hyundai Palisade. After a road trip from Ann Arbor, Mich., to the Outer Banks of North Carolina and back — in which we put 1,900 miles on the clock of Autoblog’s long-term 2021 Hyundai Palisade Calligraphy AWD — we’ve figured out that it will work great for our family, even in our more extreme use cases. Now she just needs to drive one herself.

Yes, I put all 1,900 of those miles on the Palisade over the eight days we were gone, with my wife Cat, five-year-old son Wollie, four-month-old daughter Lola, plus two dogs as passengers. And there was still room for a week’s worth of luggage, including a cooler, stroller and a Pack ‘n Play. Everyone was surprisingly comfortable.

Day one took us across the Ohio and Pennsylvania Turnpikes, through D.C. and down to Richmond, Va., where we spent the night. Day two took us to Hatteras Island, N.C. Though we stayed in a rental near the beach, the Palisade remained our base of operations — minus the cargo and dogs — while we explored the area. Day eight saw us return to Michigan in one day on a route that mostly retraced our path down, apart from circumventing D.C. traffic via some country roads through Virginia and West Virginia.

Here’s what I learned about the Palisade along the way.

It’s comfortable. Even with a rear-facing car seat clipped into a base taking up a lot of room directly behind me, I could sit comfortably (I’m a 6-foot-tall man with longer legs but a shorter torso. I had to move my seat forward maybe half an inch from where I had it to ensure a gap between my seatback and Lola’s car seat — such a small adjustment that I didn’t notice I had changed anything. The only point of discomfort in my seating position was my left elbow after long periods of contact with the armrest.

It’s also easy to maintain a good temperature. There are two climate zones up front, plus another for the rear passengers. Wollie kept hitting the rear controls on the back of the center console with his foot — mostly just to goof around — but I could lock those controls from the touchscreen. Problem solved. There are also heated and ventilated front- and second-row seats, the latter being moot in this case with car seats installed. 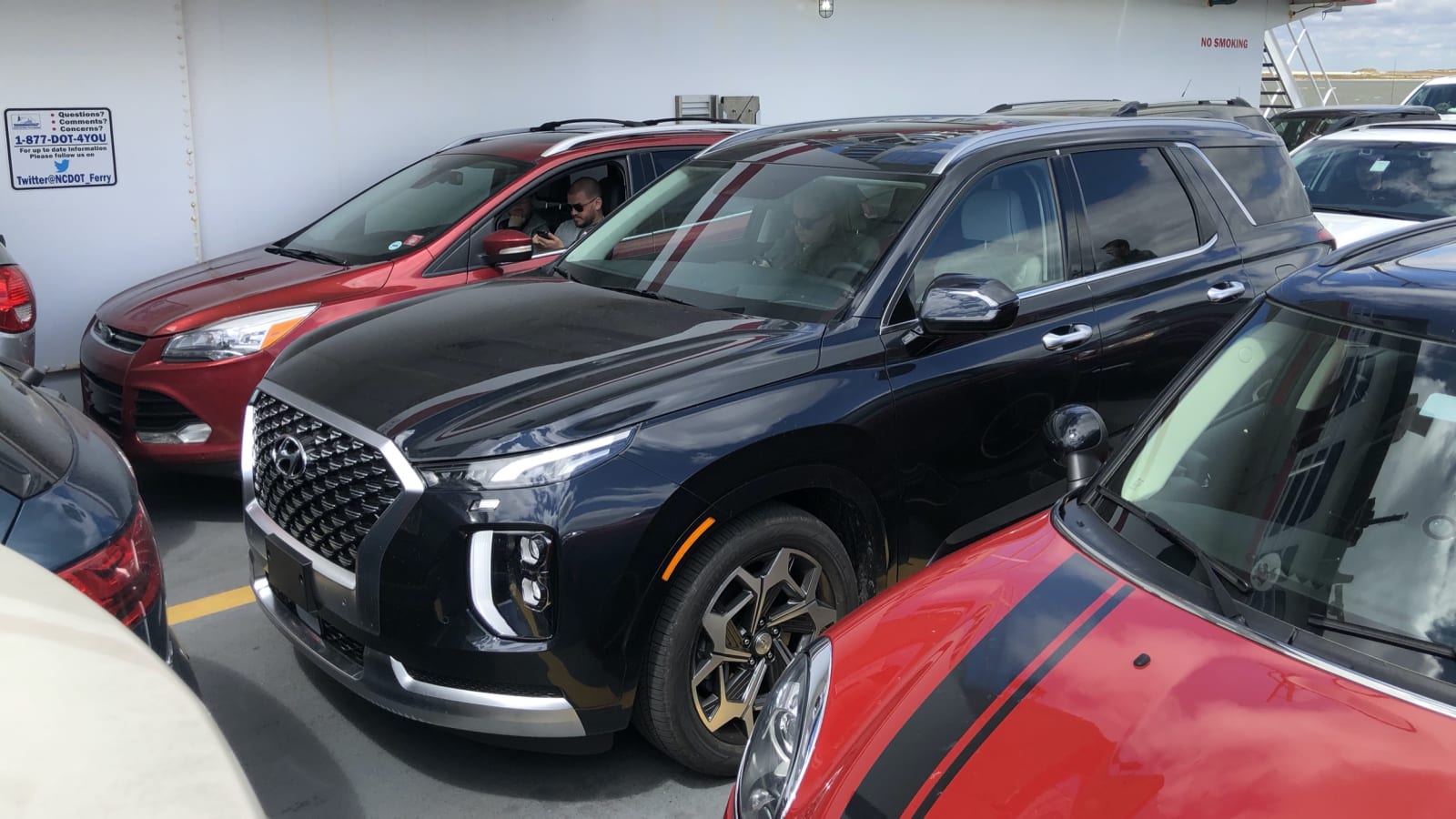 On the Hatteras-Ocracoke Ferry. 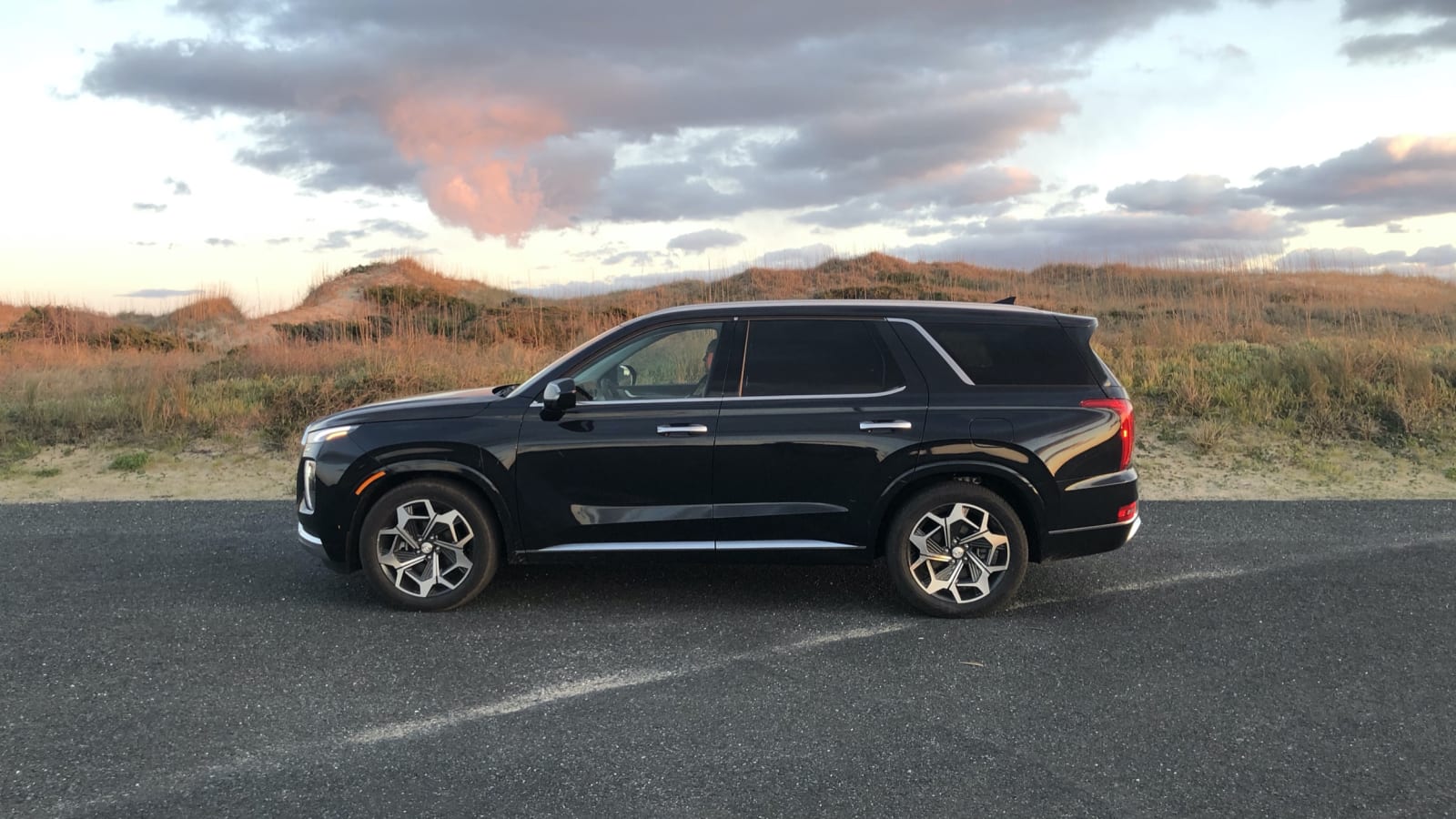 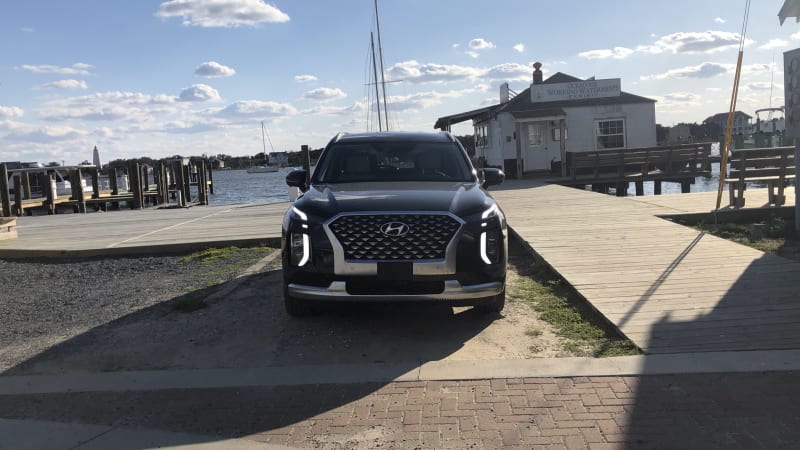 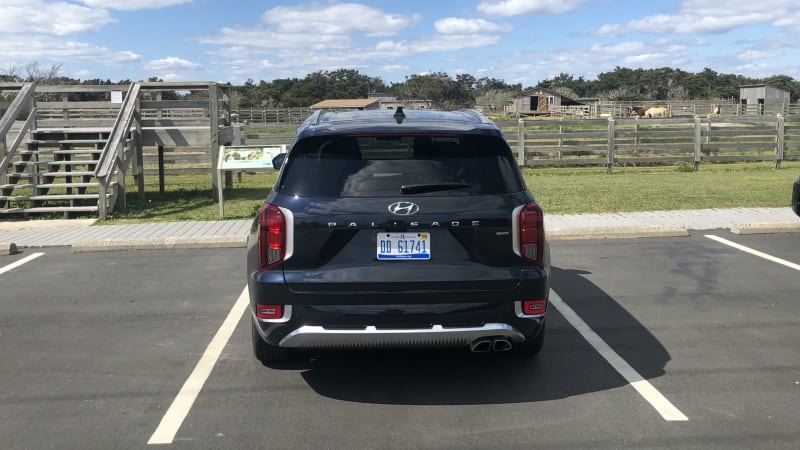 It was good for the baby. When it got sunny, I could put the sunshade up on Lola’s window to keep the glare out of her eyes, though it’s manually operated, and hard to put up without getting out of the front seat. The built-in “Sounds of Nature” ambient noise system in the media menu was fantastic for getting her to calm down if she began crying or needed to fall asleep. We listened to ocean waves and falling rain for many hours on this trip. She also seemed to calm down when I opened the rear moonroof shade. The sky is like nature’s mobile.

West Coast Editor James Riswick explores the same “Sounds of Nature” in the 2020 Hyundai Sonata in the below video:

Fuel economy is as advertised. Over the course of the trip, I used the better part of five full tanks of gas. This Palisade is rated at 19 miles per gallon city, 24 mpg highway, and 21 mpg combined. I averaged 23.5 miles per gallon on this mostly-highway drive.

Final thoughts: The Palisade was a fantastic vehicle for a long family road trip, proving it’ll be sufficient for the Snyder family’s needs. It’ll be ample for our frequent drives four hours north to our cottage, and we won’t hesitate to go on longer road trips, as well. It kept everyone happy, driver included. It also provided a lot of confidence that it could do the long treks safely, providing a higher amount of awareness than a lot of other vehicles on the road (and I’ll have more on the driver assistance tech in an upcoming long-term post). I’d be sad to be handing the keys off to the next Autoblog staff member to take a turn with it, if it didn’t seem likely that a Palisade were to eventually find its way into our driveway on a more permanent basis.