The 2022 Infiniti QX55 is the crossover-coupe version of the QX50, which like other such variants available throughout the industry, chops the roofline and cargo area down to create a “coupe-like” appearance. Obviously, this results in a reduction in cargo capacity, but because that reduction is largely above the back seat line, the actual reduction in usable cargo space isn’t as great as you might expect. While carrying a large box or some other tall, bulky thing will be more difficult, smaller items like suitcases won’t necessarily be much different since carrying them above the back seat line can reduce or eliminate rear visibility and create a hazard by flying forward while stopping as well. It’s for those very reasons I don’t stack to the roof in luggage tests.

Now, I have not tested the QX50, so I have no point of comparison in that regard. But I have tested a variety of crossover-coupes and the QX55 does indeed share common attributes … and detriments. 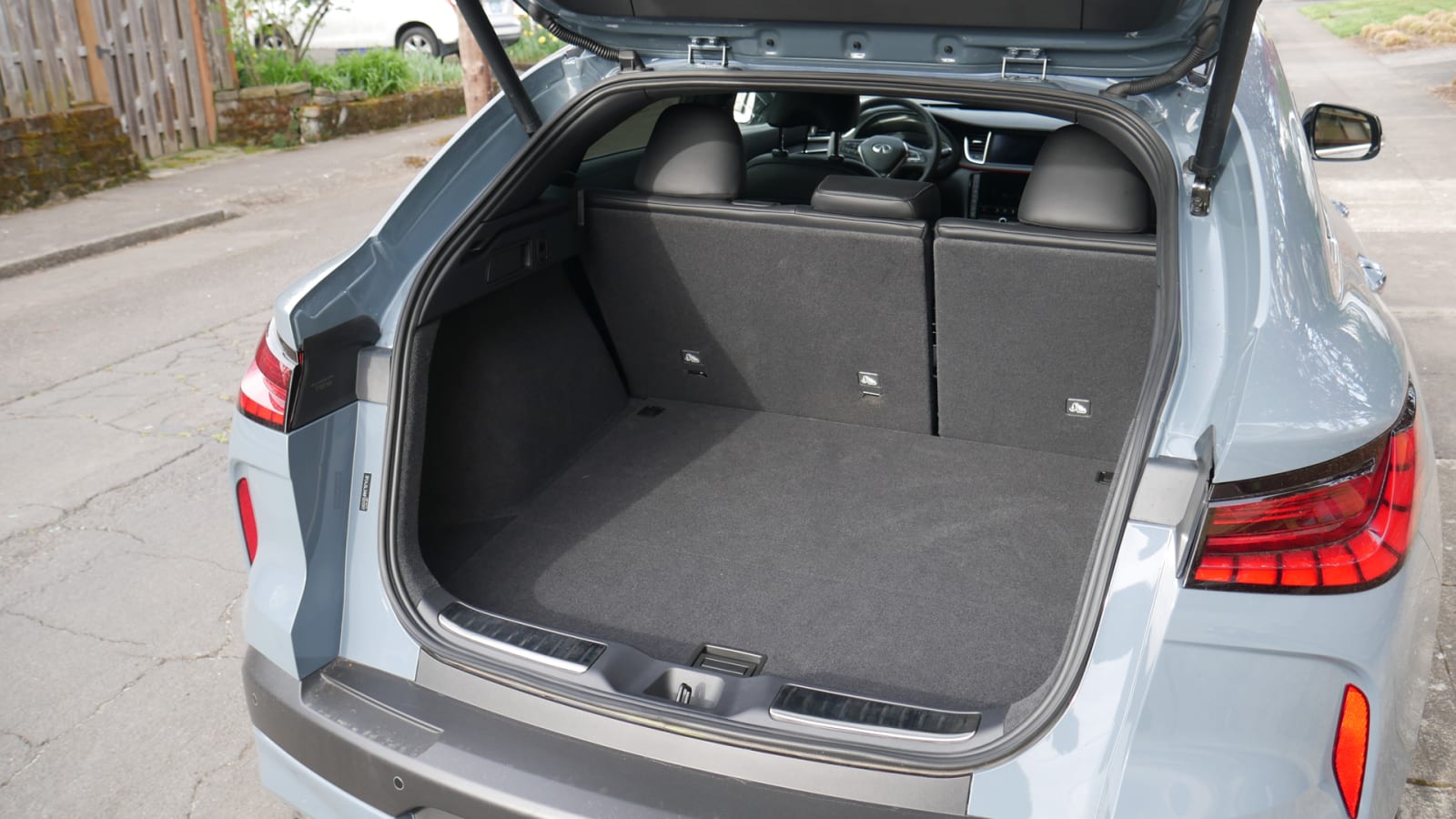 On paper, the Infiniti QX55 has 26.9 cubic-feet of cargo space behind its back seat. That is basically the same as the Audi e-Tron Sportback and a bit less than the Mustang Mach-E and Toyota Venza. The Cayenne Coupe figure just seems inaccurate.

The QX55’s back seat reclines, however, so its amount is variable. I do not know where Infiniti set it while doing it’s measurement, but I set it for a comfortable degree comparable to most fixed back seats. You can also easily lower the back seat with handles in the cargo area. Both elements are pictured below. 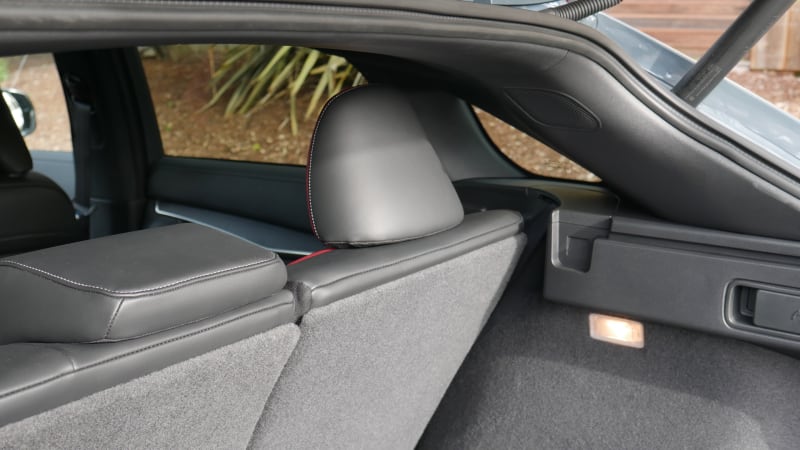 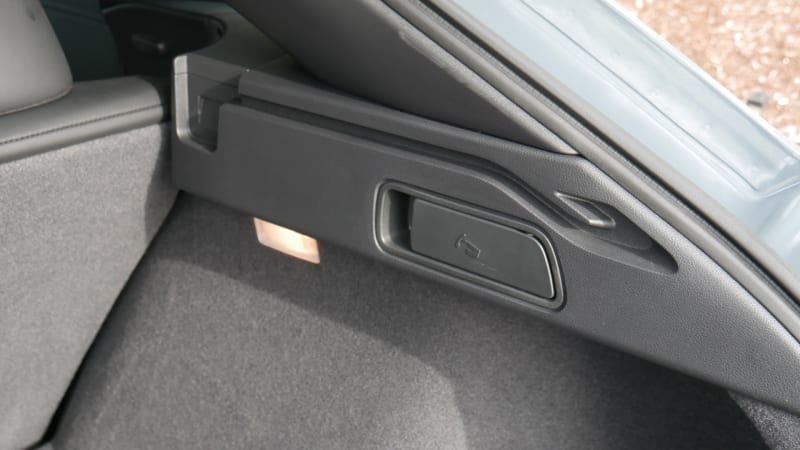 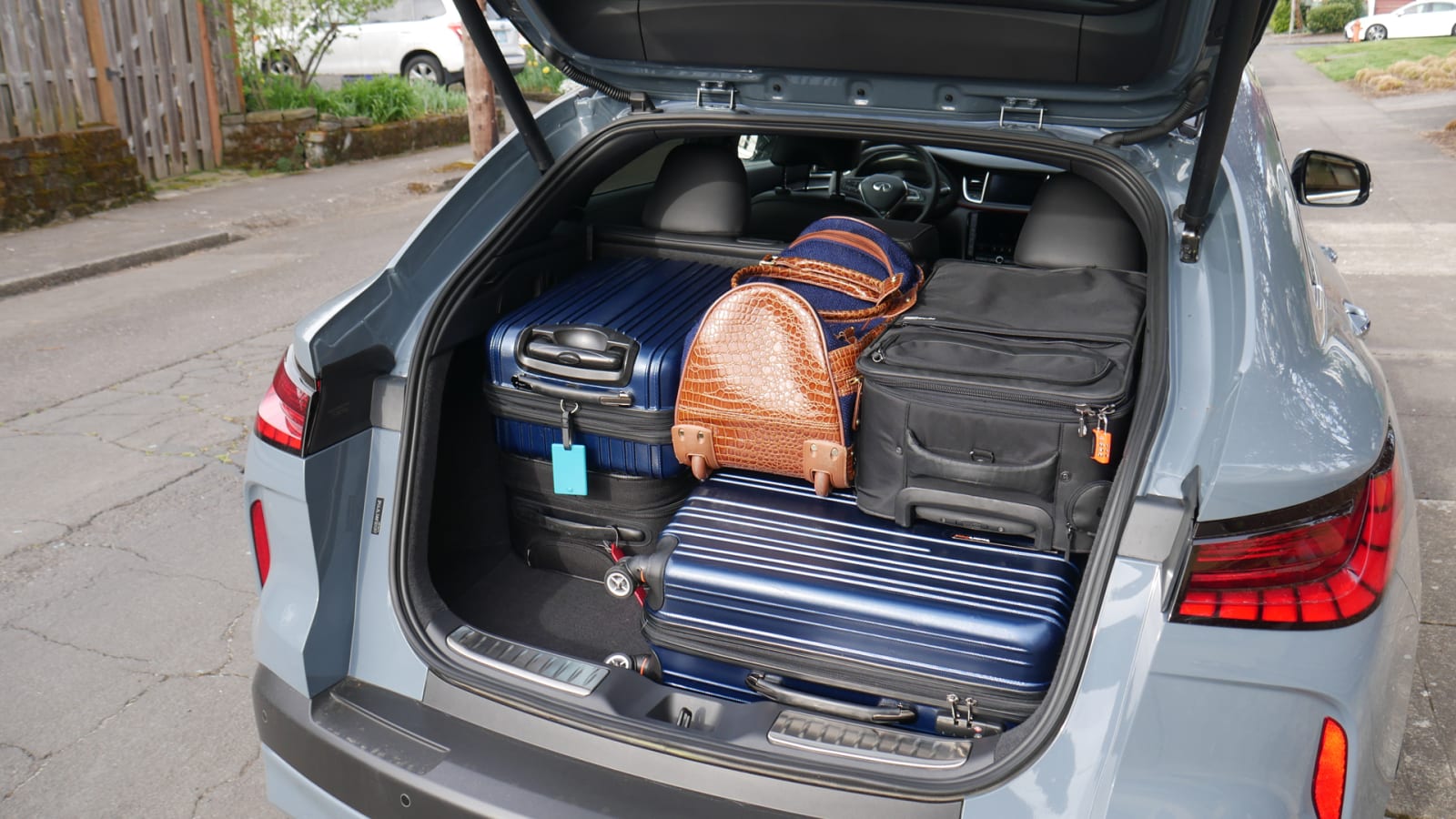 Cool, that was easy. All the bags easily fit with minimal Tetrising and …

Oh no. Wait, they don’t. Despite all the bags seeming to be clear of the liftgate, the power-closing function got stuck repeatedly. I could slam it shut manually, but that’s another no-no here at Luggage Test Portland in order to keep things consistent.

“Boy, what an annoying cargo area,” I said to an empty street.

This is what eventually worked after the sixth attempt. 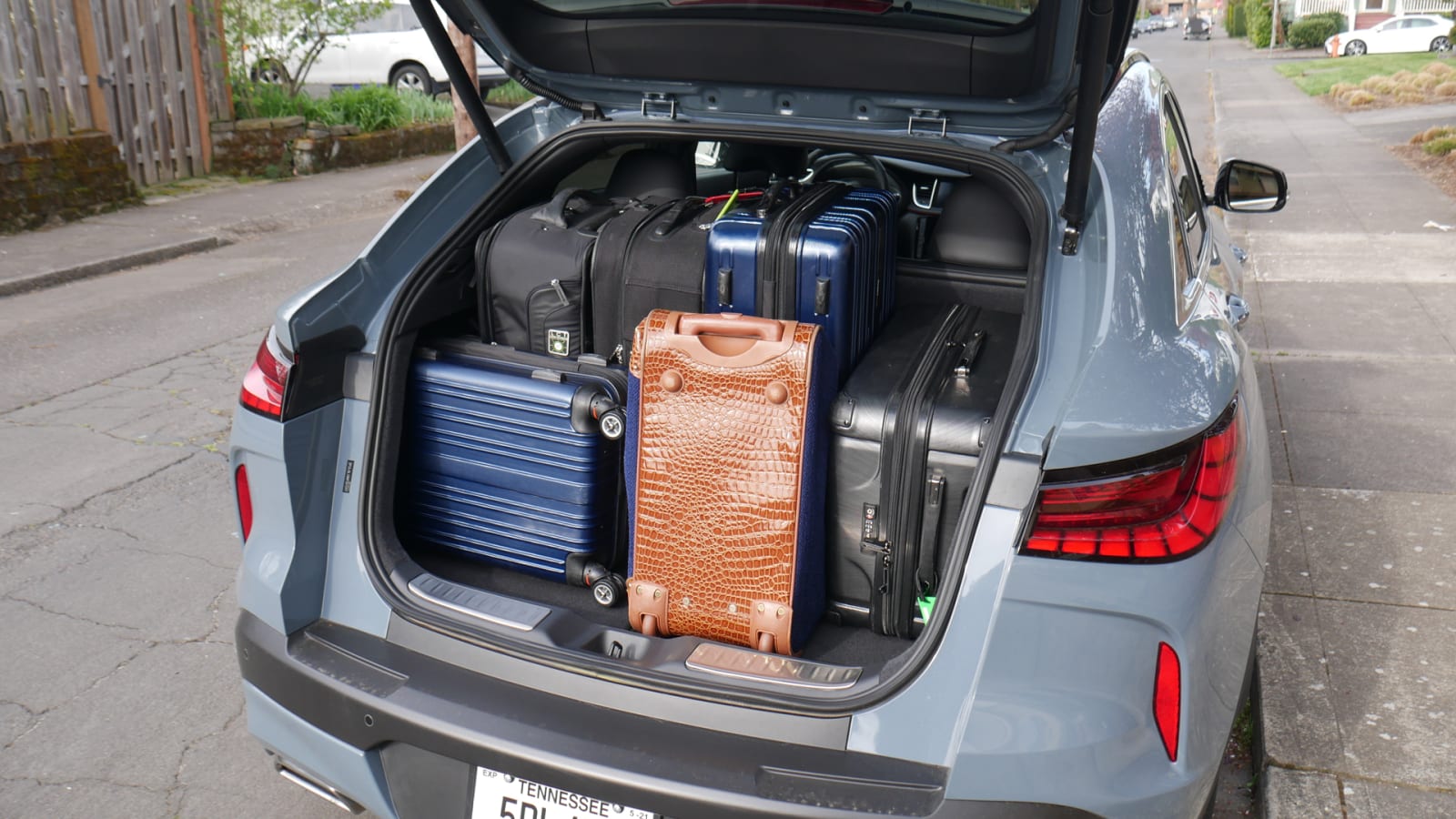 So everything fit, but rear visibility was reduced, if not eliminated. As it turns out, the problem was not the chopped roofline, but the angled opening at the bottom that prevents you from putting square items close to the liftgate edge. The Cayenne Coupe has a similar problem, but the other crossover-coupes mentioned above do not. Not coincidentally, they were easier to load.

That said, the reclining back seat does provide the option of squeezing a few extra millimeters or centimeters out of the cargo area should you get the dreaded power liftgate auto-stop. 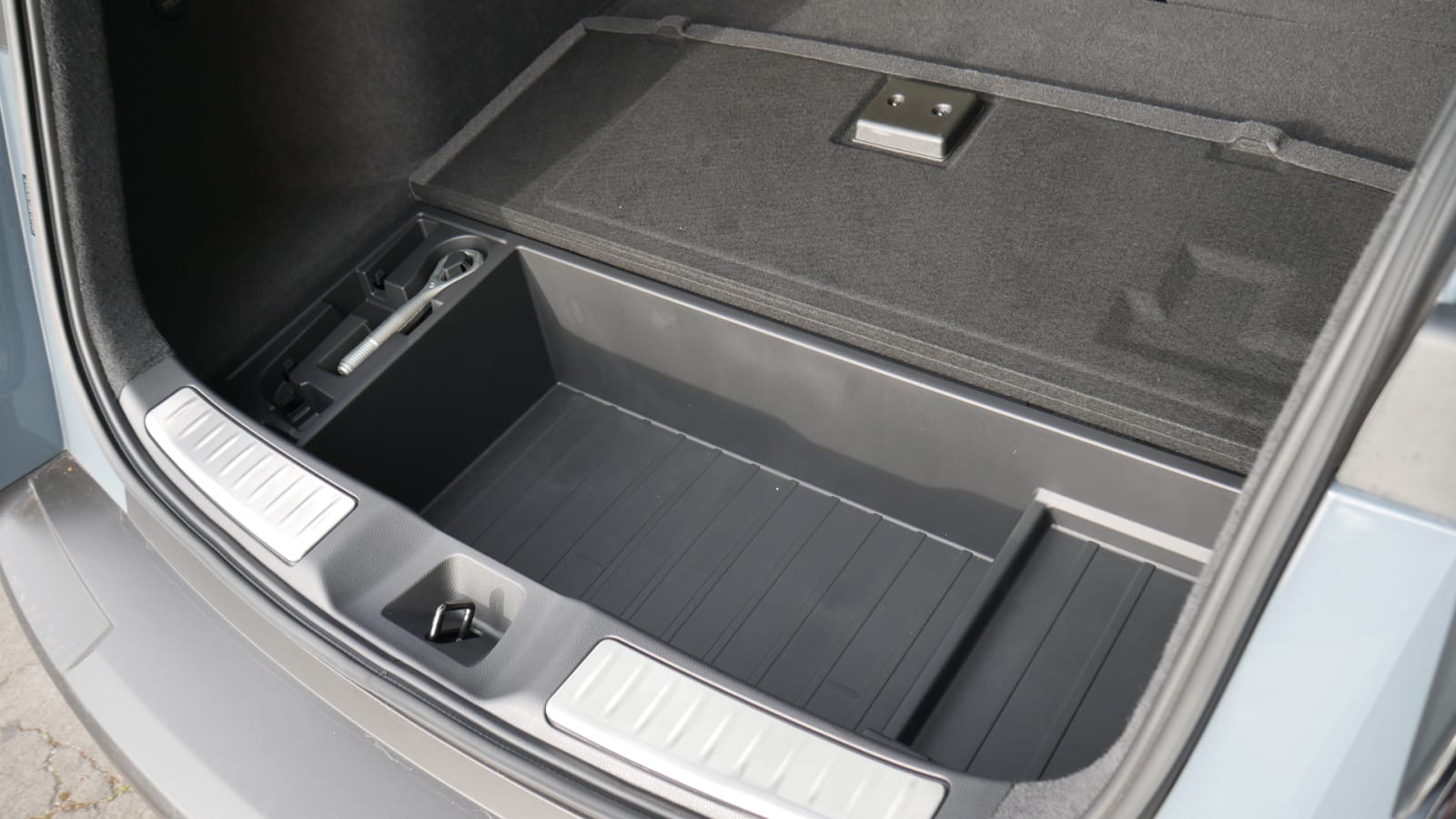 And hey, there’s also some bonus space under the floor. It’s not big enough for any of my bags, but it would still be useful for small items, particularly those that might be wet or dirty given the plastic lining.

Sergio Pérez Is Gonna Do Pretty Well Next Year

Lucid looking to go public through SPAC in $15 billion deal