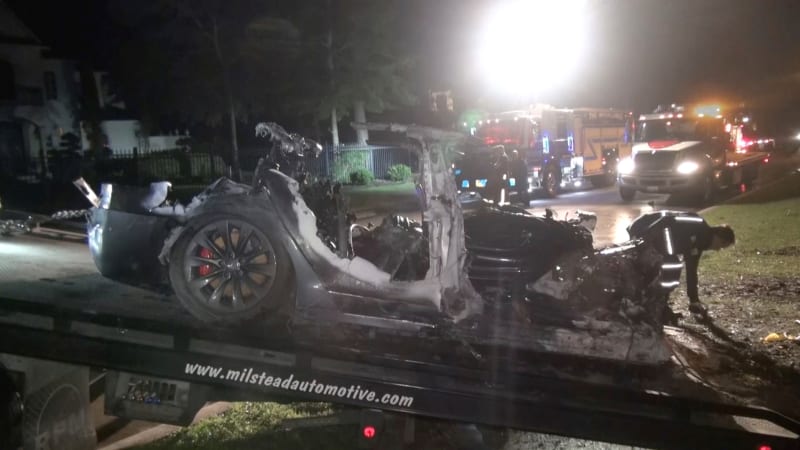 Tesla is in the news again over another deadly crash involving one of its cars, in this case, the Model S.

It occurred in Texas last weekend, and both occupants in the Model S were killed. Investigators from the scene are certain that neither of the deceased occupants were in the driver’s seat at the time of the crash (one in the passenger seat and the other in the rear seat). Additionally, witnesses told the police that the accident happened shortly after the victims left a house, saying they would test automated driving capability.

That “automated driving capability” is Tesla’s well-known “Autopilot” driving assistance system. Elon Musk has tweeted to say that the company’s data shows the vehicle was not operating on Autopilot and that the car was not equipped with the company’s more advanced, but still hands-on driving assist (confusingly called “Full Self-Driving”). His tweet was also in response to a comment saying that the feature couldn’t be activated with no one in the driver seat. He further added that lane lines had to be present for the system to be enabled. All that aside, it remains unknown if the system had been deactivated prior to the crash after having been on previous to that.

Your research as a private individual is better than professionals @WSJ!

Data logs recovered so far show Autopilot was not enabled & this car did not purchase FSD.

Moreover, standard Autopilot would require lane lines to turn on, which this street did not have.

Consumer Reports decided to run with the main allegation that neither occupant was in the driver’s seat at the time of the crash to see if Tesla’s cars would allow Autopilot to be active while no one is in the driver’s seat. CR used its closed test track and the Model Y it owns to perform the test.

The short answer is yes. Autopilot will remain on and functioning despite nobody actually being seated in the driver’s seat. All Consumer Reports had to do to trick the Model Y into believing someone was in the seat was keep the seatbelt fastened and place a weighted chain on the steering wheel. This simulated a driver’s hand on the wheel, and kept Autopilot from deactivating. The test driver for the experiment remained in the passenger seat to safely speed up and slow down the car by reaching their leg across the way to the pedals.

You can read the whole story on Consumer Reports’ website, and we highly recommend that you do, as they provide many more details and additional background on the setup and results of the experiment.

Tesla’s driver monitoring system for its advanced Autopilot tech is different than similar systems out there in that it’s entirely reliant on steering wheel torque to remain on. Companies like GM, Ford and BMW use camera-based monitoring systems to ensure that the driver’s eyes are looking at the road. Meanwhile, Tesla’s system doesn’t even ensure that someone is in the driver’s seat.

We’ll continue to follow this crash investigation and bring you updates as they come.