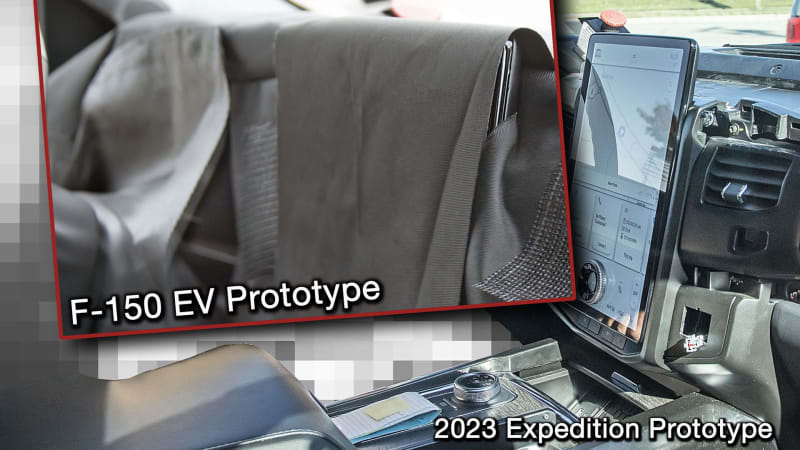 We’ve had a number of up-close Ford F-150 EV spy shots. They’ve helped us get a clearer picture of the suspension and motor arrangement, among other things. Now we have shots of the interior. And while Ford thought they had it well covered, a small gap gave us a big hint at the truck’s infotainment system.

You can just make out the edge of a screen, one that doesn’t fit flush to the dashboard like the F-150‘s current systems use. Comparing it to the upcoming Expedition’s revised interior as well as that of the Mustang Mach-E, it appears to use the same giant screen. That screen is backed by the Ford Sync 4A operating system and interface. In the Mach-E, the screen is a giant 15.5 inches oriented vertically, it looks like it will be a similar situation in the F-150.

Our previous experiences with Sync 4A and its accompanying screen have been good. It’s a responsive, bright screen with large, easy to operate icons. We also appreciate the volume knob at the bottom. We’ll be curious to see if the infotainment screen is exclusive to the F-150 EV, or if it will become available for other F-150 models. We expect the latter is more likely, since the Expedition will have the screen, too.