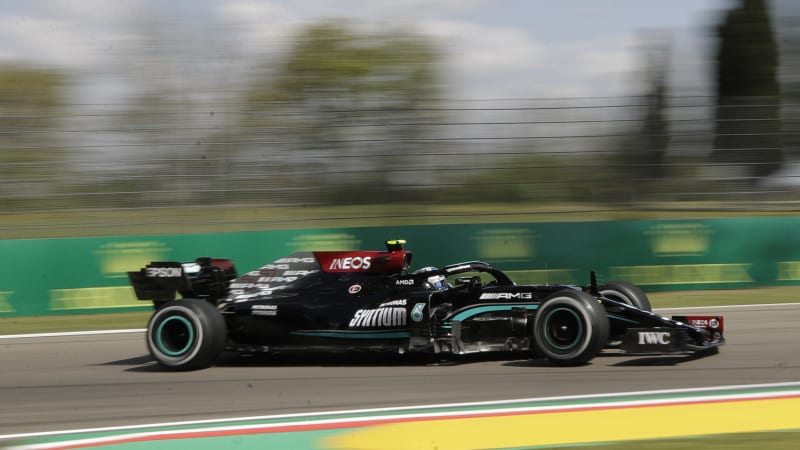 The Red Bulls hit trouble in practice for the Emilia Romagna Grand Prix at Imola on Friday, while Valtteri Bottas led Mercedes teammate Lewis Hamilton one-two in both sessions.

Sergio Perez collided with Alpine’s Esteban Ocon in the morning, bringing out red flags, and the Mexican’s teammate Max Verstappen stopped his Red Bull in the afternoon with a driveshaft problem.

Seven-time world champion Hamilton, last year’s race winner when Imola returned to the calendar in November, was 0.041 slower in the morning and a mere 0.010 off after lunch.

“If I compare it to Bahrain, how the car‘s feeling, it’s definitely feeling better so that’s nice, but it’s a different track and different type of circuit and surface and grip level,” said Bottas. “At least the weekend started in a positive way … I’m a lot happier with the car now than three weeks ago.

“We definitely didn’t see the best out of Red Bull yet today,” added the Finn. “No doubt they are going to be fast, and we still don’t think we have the fastest car. We really need to prove that on Saturday.”

Championship leader Hamilton said he had no major issues and the tires were working well.

“So far a good day for us,” he said. “I don’t think we’ve seen the best from the Red Bulls yet, it looked like they had quite a messy session.”

Verstappen, Hamilton’s closest rival in the Bahrain season-opener when he started on pole and finished second, was third in the first session but managed only five laps in the afternoon before stopping.

“I think you know what you have to do anyway, so it should be alright,” he said of the setback. “We just have to focus on ourselves to do a better job.”

The first session ended with Russian rookie Nikita Mazepin spinning his Haas at the final corner for the second time in the space of an hour, and the second was red flagged when Ferrari’s Charles Leclerc crashed into the tire barriers.

“Sorry guys. I was pushing … quite a bit,” said Leclerc from the cockpit.

Leclerc had been fourth fastest in the morning and ahead of AlphaTauri’s Pierre Gasly, who ended the day third fastest.

Technical problems that affected radio communications and data contributed to the turn five collision between Frenchman Ocon and Perez.

The details of the coming together were not immediately clear, with cameras not capturing images, but stewards decided to take no further action.

“Ocon slowed before turn five in order to let Perez by, as well as moving entirely to the inside of the turn,” they said in a statement. “Perez was on a fast lap. The two cars reached the apex at the same time, and just barely touched wheels.

“Both drivers agreed in the hearing that it was an unfortunate miscommunication of timing between them, not helped by the fact that both drivers had limited or no communications with their teams at the time.”

Perez’s car came to halt with the left rear tire in shreds, while Ocon parked up further down the track.