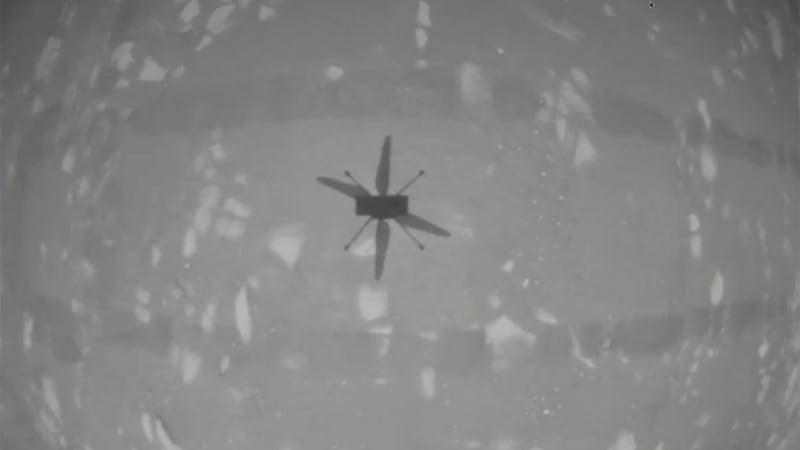 In this image from NASA, the experimental Mars helicopter Ingenuity photographed its shadow as it hovers above the surface of Mars on Monday, April 19.

CAPE CANAVERAL, Fla. — NASA’s experimental helicopter Ingenuity rose into the thin air above the dusty red surface of Mars on Monday, achieving the first powered flight by an aircraft on another planet.

The triumph was hailed as a Wright Brothers moment. The mini 4-pound (1.8-kilogram) copter even carried a bit of wing fabric from the 1903 Wright Flyer, which made similar history at Kitty Hawk, North Carolina.

“Altimeter data confirms that Ingenuity has performed its first flight, the first flight of a powered aircraft on another planet,” said the helicopter’s chief pilot back on Earth, Havard Grip, his voice breaking as his teammates erupted in applause.

It was a brief hop — just 39 seconds — but accomplished all the major milestones.

Project manager MiMi Aung was jubilant as she ripped up the papers holding the plan in case the flight had failed. “We’ve been talking so long about our Wright Brothers moment, and here it is,” she said.

Flight controllers at NASA’s Jet Propulsion Laboratory in California declared success after receiving the data and images via the Perseverance rover, which stood watch more than 200 feet (65 meters) away. Ingenuity hitched a ride to Mars on Perseverance, clinging to the rover’s belly upon their arrival in an ancient river delta in February.

The $85 million helicopter demo was considered high risk, yet high reward. “Each world gets only one first flight,” Aung observed earlier this month.

Ground controllers had to wait more than three excruciating hours before learning whether the pre-programmed flight had succeeded more than 170 million miles (287 million kilometers) away. Adding to their anxiety: A software error prevented the helicopter from lifting off a week earlier and had engineers scrambling to come up with a fix.

When the news finally came, the operations center filled with applause, cheers and laughter. More followed when the first black and white photo from Ingenuity appeared on the Mission Control screens, showing the helicopter’s shadow as it hovered above the surface of Mars. Next came the stunning color images of the copter descending back to the surface, taken by Perseverance, “the best host little Ingenuity could ever hope for,” Aung said in thanking everyone. 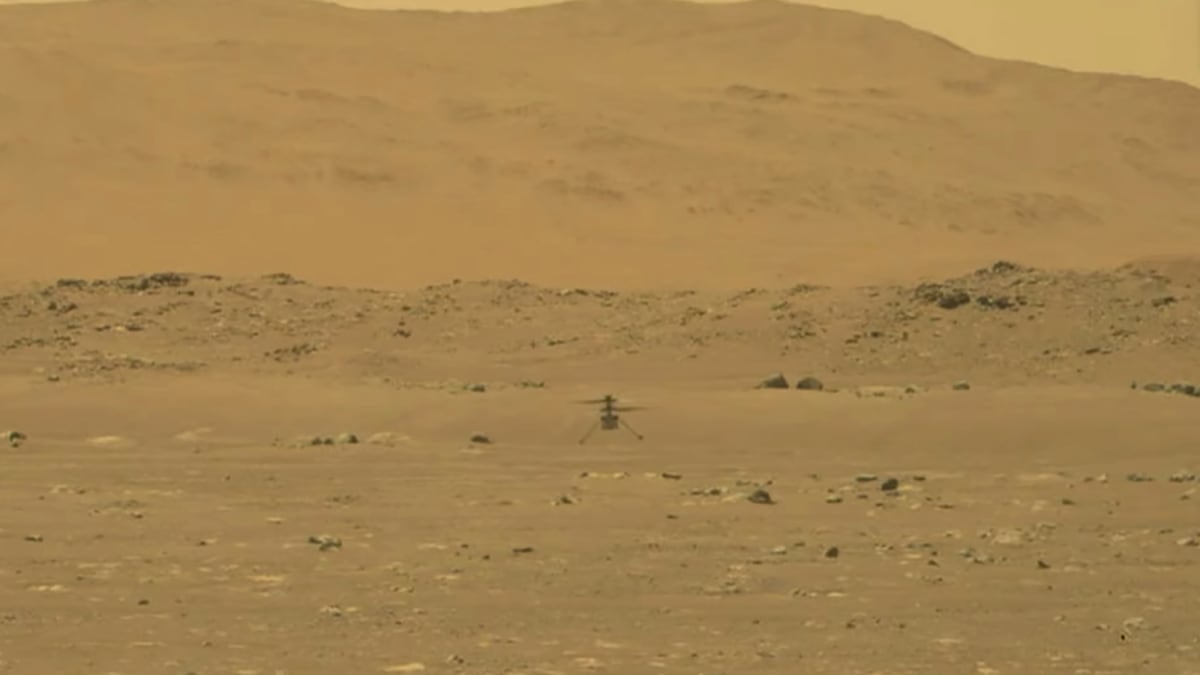 The helicopter achieved its planned altitude of 10 feet (3 meters), according to the altimeter data, and hovered for a full 30 seconds, appearing stable. The touchdown looked just as clean. More details were expected in the coming hours and days.

To accomplish all this, the helicopter’s twin, counter-rotating rotor blades needed to spin at 2,500 revolutions per minute — five times faster than on Earth. With an atmosphere just 1 percent the thickness of Earth’s, engineers had to build a helicopter light enough — with blades spinning fast enough — to generate this otherworldly lift. At the same time, it had to be sturdy enough to withstand the Martian wind and extreme cold.

More than six years in the making, Ingenuity is a barebones 19 inches (49 centimeters) tall, a spindly four-legged chopper. Its fuselage, containing all the batteries, heaters and sensors, is the size of a tissue box. The carbon-fiber, foam-filled rotors are the biggest pieces: Each pair stretches 4 feet (1.2 meters) tip to tip.

The helicopter is topped with a solar panel for recharging the batteries, crucial for its survival during the minus-130 degree Fahrenheit (minus-90 degree-Celsius) Martian nights.

NASA chose a flat, relatively rock-free patch for Ingenuity’s airfield, measuring 33 feet by 33 feet (10 meters by 10 meters). It turned out to be less than 100 feet (30 meters) from the original landing site in Jezero Crater. The helicopter was released from the rover onto the airfield on April 3. Flight commands were sent Sunday, after controllers sent up a software correction for the rotor blade spin-up.

“While these two iconic moments in aviation history may be separated by time and 173 million miles of space, they now will forever be linked,” NASA’s science missions chief Thomas Zurbuchen announced.

The little chopper with a giant job attracted attention from around the world, from the moment it launched with Perseverance last July. Even Arnold Schwarzenegger joined in the fun, rooting for Ingenuity over the weekend via Twitter. “Get to the chopper!” he shouted, re-enacting a line from his 1987 sci-fi film “Predator.”

Up to five helicopter flights are planned, each one increasingly ambitious. If successful, the demo could lead the way to a fleet of Martian drones in decades to come, providing aerial views, transporting packages and serving as scouts for astronauts. High-altitude helicopters here on Earth could also benefit — imagine choppers easily navigating the Himalayas.

“This gives us amazing hope for all of humanity,” Zurbuchen tweeted. Indeed, JPL’s mantra, “Dare Mighty Things,” was printed on a wall of the control room.

Ingenuity’s team has until the beginning of May to complete the test flights. That’s because the rover needs to get on with its main mission: collecting rock samples that could hold evidence of past Martian life, for return to Earth a decade from now.

VW Has So Many Brands It Just Made One All-Electric

This Porsche is the quickest 911 ever made, and you can win it

Here’s A Modern Aerodynamic Analysis Of A 1980s F1 Car